Recently we got a Mosaic-T Evaluation Kit (FW version 4.8.2) from Septentrio. It is a multi-band, multi-constellation GNSS receiver explicitly designed for timing applications. We thought it would be another easy target for GNSS spoofing… However, we were wrong.

We were so impressed by the performance of the AIM+ technology that we decided to write a detailed review.

All the findings provided below are based purely on the results and observations made during extensive testing.

When running the same scenario multiple times, the receiver behaves differently. In this article, we have included only those attempts that characterize the pros and cons of the receiver.

For the spoofing vulnerability test, we use a HackRF One in combination with a GPS-SDR-SIM and a GP-Simulator evaluation kit: 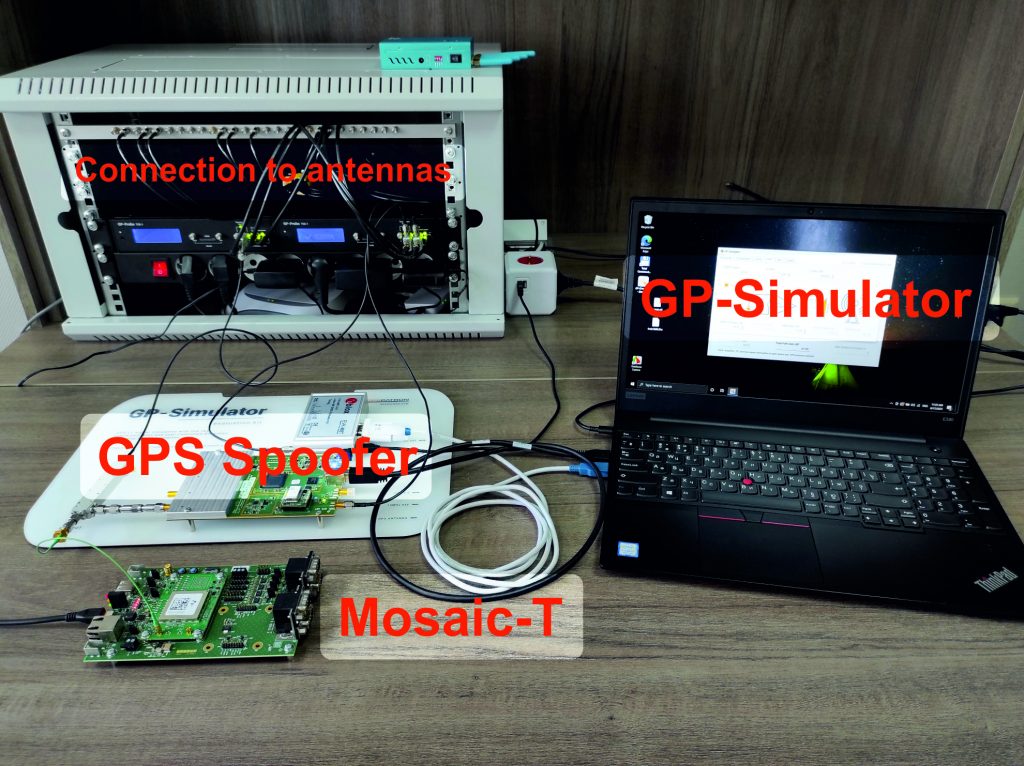 The fake GPS signal was injected into the antenna path through an RF coupler: 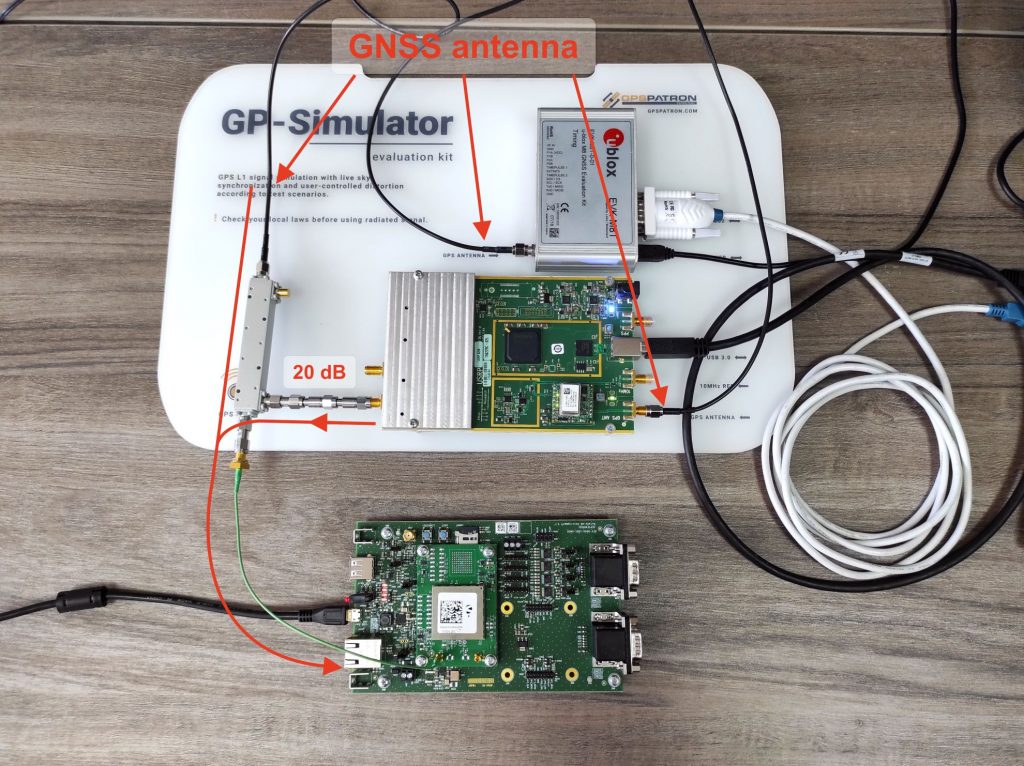 In real life, the L2 and L5 bands are always blocked during GNSS spoofing. We did not want to waste time on more complex testbeds with RF generators/jammers. Therefore, we used an antenna with only the L1 band.

The GP-Simulator was carefully calibrated with a spectrum analyzer: 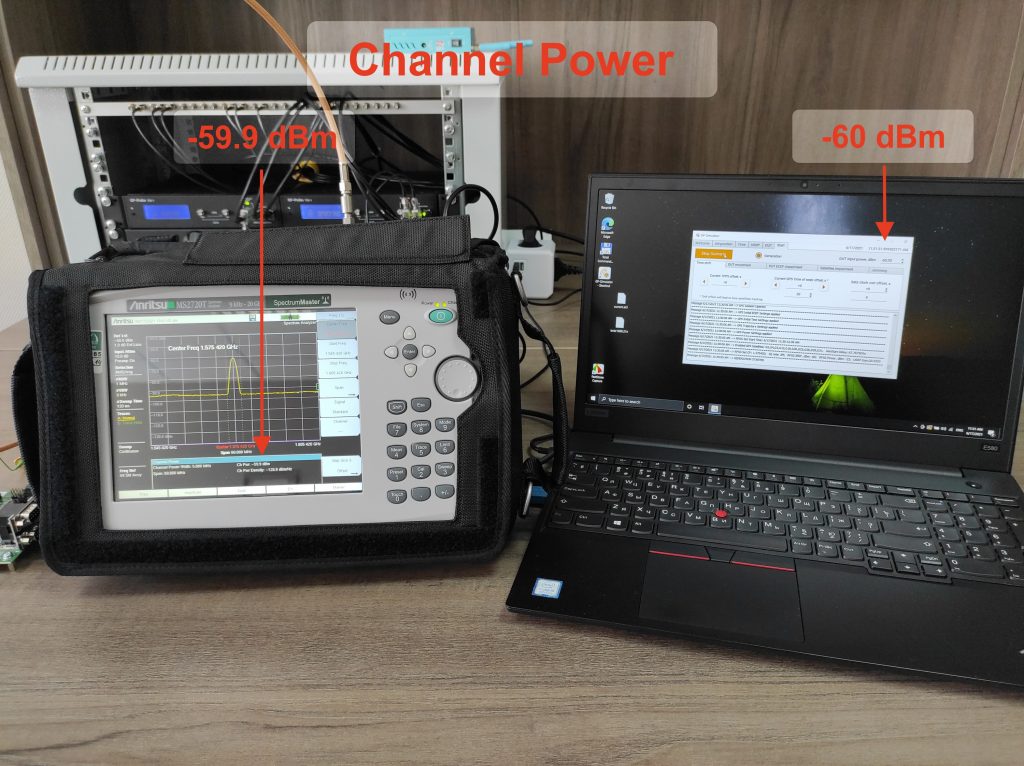 All power levels given in this article refer to the receiver’s input port.

All the constellations were active: 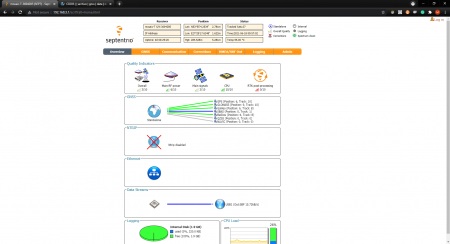 In the web interface, we were interested in this flag specifically, which can be denoted as “Spectrum Clean”, “Spoofing”, or “Interference Mitigated”:

Be sure to enable the Wideband Interference Mitigation option: 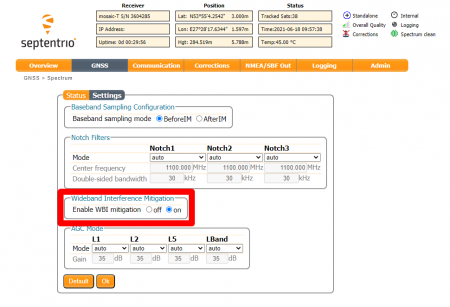 To monitor the receiver parameters under tests, we used both the embedded Web interface and RxControl software from Septentrio: 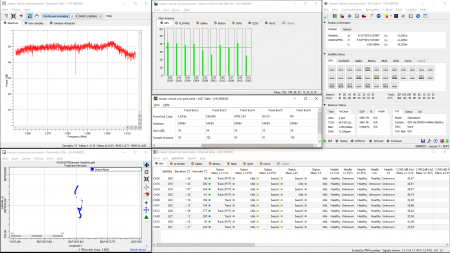 Test 1. HackRF One with GPS-SDR-SIM

We spent a lot of time and effort to make at least one successful attack with GPS-SDR-SIM software and HackRF One­ — we were unsuccessful.

The scenarios we tried:

No matter how hard we tried, all our attempts were unsuccessful!

The connection scheme was the same as for the GP-Simulator: 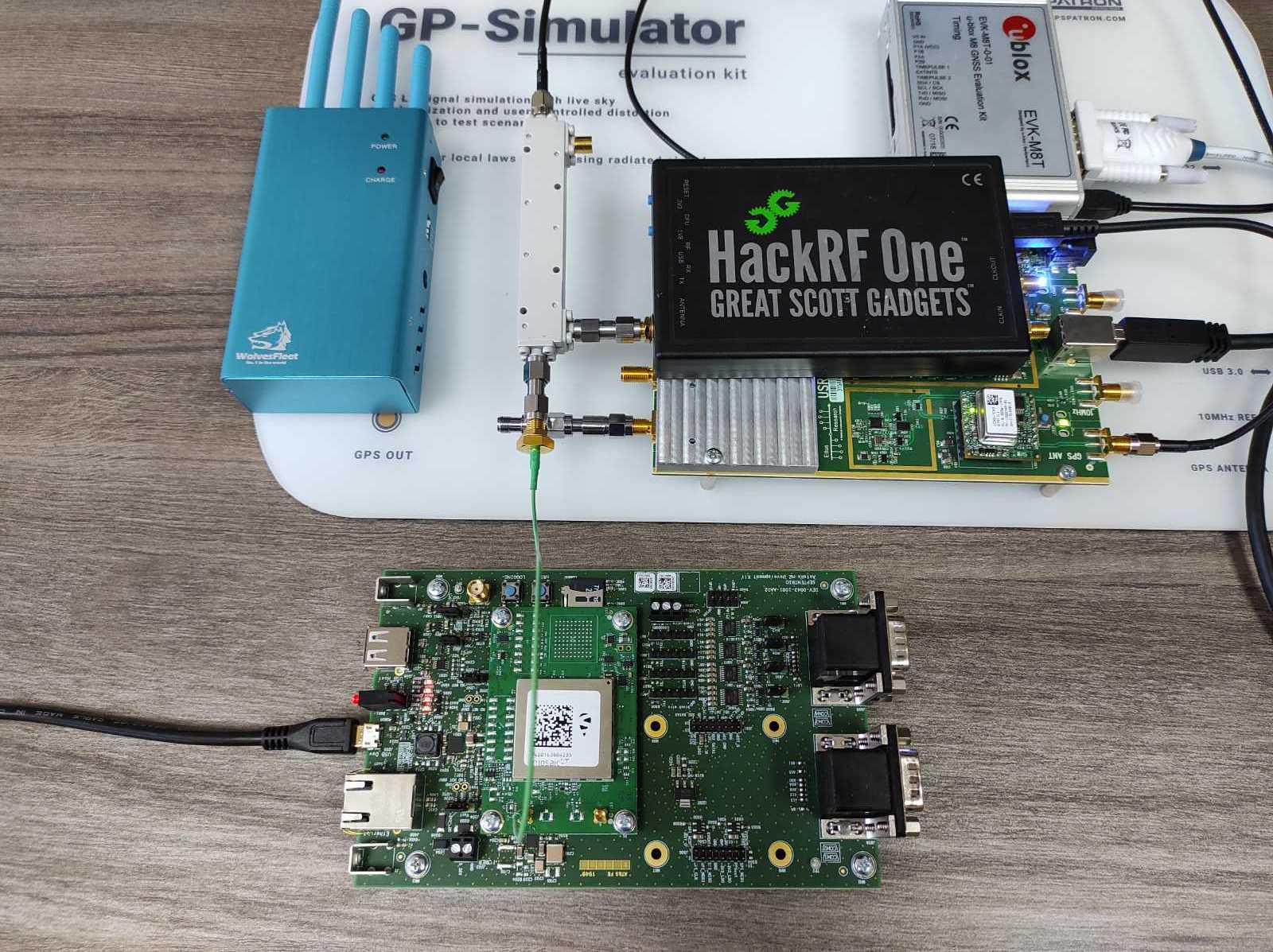 Immediately after activating the spoofer, the receiver lost GPS satellites and stopped providing a navigation solution:

We then faced a strange behavior from the receiver after resetting under GPS spoofing. When we reset the receiver under spoofing, it did not use the fake signals. And that was truly remarkable: 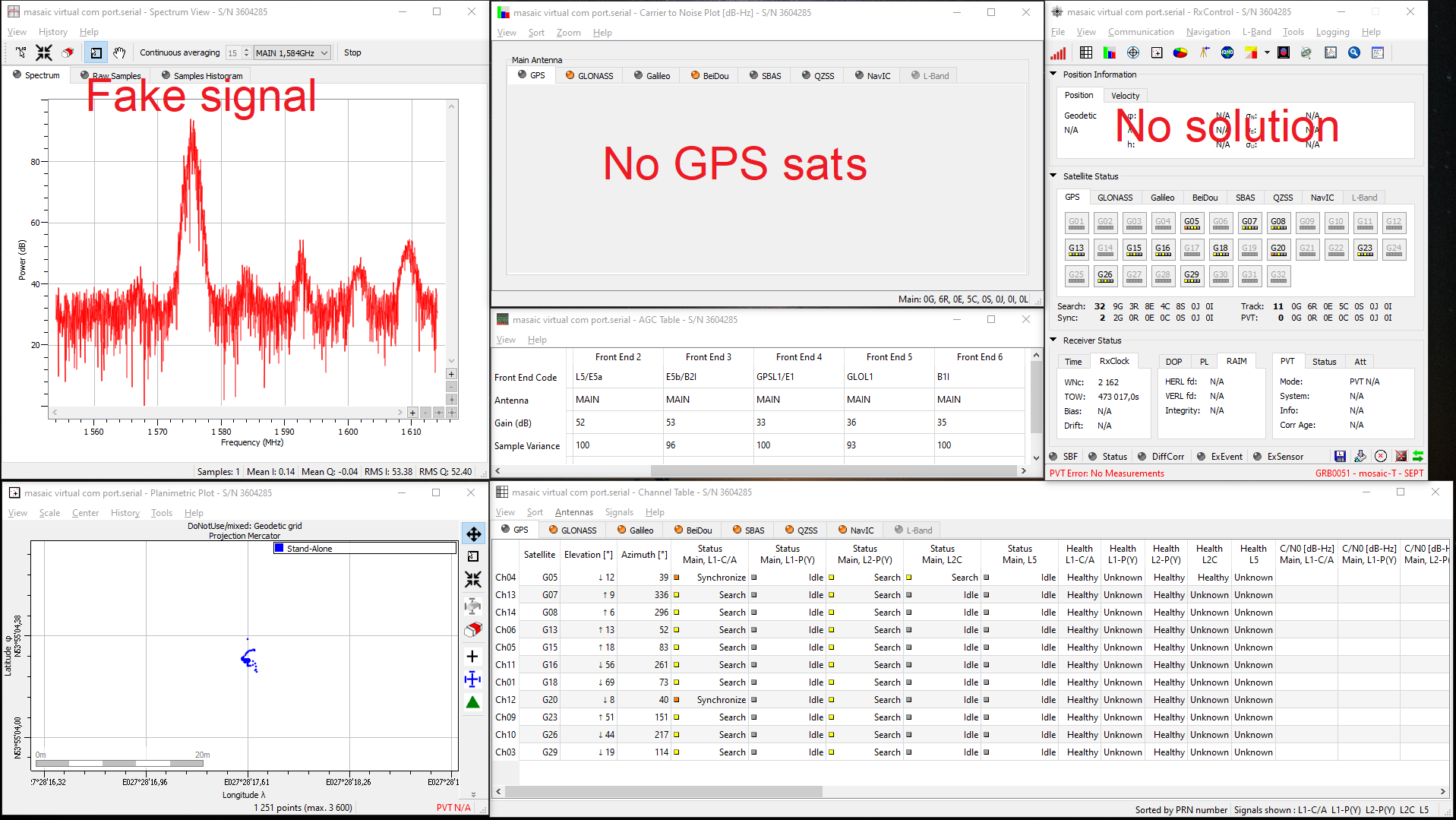 Then we turned off the spoofer and observed that the receiver did not accept the original signals as well and did not provide a navigation solution until we reset it again:

The spoofer was already disabled in that video. However, the receiver saw only GLONASS and BeiDou satellites and did not provide a navigation solution.

The receiver performed almost flawlessly in this test except for the following:

The last point is the most important. Because the following user story could happen:

We made many attempts to perform non-coherent spoofing. Sometimes the attack was successful, and sometimes it wasn’t. In each attempt, the receiver behaved slightly differently. This section gives a detailed description of only one attempt, which we believe best characterizes the receiver.

In this test, we ran the spoofer with a power level of -100 dBm. This is the power level at the antenna input of the receiver. The typical signal power level of genuine satellites after an antenna’s preamplifier is around -120 dBm. Then we incrementally increased the power up to -30 dBm.

We wanted to show not only the receiver’s tolerance to non-coherent spoofing but also the excellent performance of AIM+ for interference suppression.

Why do we need such a high power level as -30 dBm?
Well, we simulated only the GPS constellation. Other systems should be blocked to spoof the receiver. It can be done using a GNSS jammer or done with a high power level of a spoofer. The high power forces the embedded AGC to decrease gain. Hence, all real signals will be invisible. Moreover, we wanted to demonstrate the AIM+ in action.
Multi-constellation GNSS simulators are still expensive, and in real life, we face a common scenario with a GPS spoofer and GNSS jammer (it is very affordable and effective).

In the table below, we have described all the steps and observations performed:

Is a high power level of -30 dBm really required? Of course not.
A successful non-coherent attack can also be performed with a power level of -100 dBm under the following scenarios:

Let me remind you that in this and all other tests we assume that the signals in the L2 and L5 bands are completely blocked by jammer.

In the first test, we already showed that the receiver does not perceive the original signals after a reset under spoofing. In this test, we showed the effect of the reset under the GP-Simulator.

Check out the video of the experiment:

In this experiment, we demonstrated partially successful spoofing. The receiver produced an unstable navigational solution. We showed again what happens if the receiver is reset or turned on under non-coherent spoofing. After disabling the spoofer, the receiver tracks the original signal but does not provide a solution.

In this experiment, we showed what a deliberate coherent attack with coordinate shift might look like. Since we simulated only GPS signals, we switched the receiver to GPS-only mode. Precisely the same results can be obtained for the receiver in multi-GNSS mode if you use a multi-constellation GNSS simulator.

We used a very simple scenario:

There is only one method of detecting such a scenario. This is the spatial signal analysis with multiple antennas.

Here we showed the receiver’s response to GPS spoofing when the receiver saw all the constellations. The scenario is exactly identical to the previous test.

Exactly like in the previous test, the receiver instantly switched to fake signals. But when we started shifting coordinates, the receiver stopped providing a navigational solution and indicated a PVT error: Outlier. In this attempt, the receiver did not show the spoofing flag. But during preparation, we repeatedly encountered successful detection of a spoofing attack when the coordinates were shifted.

We suppose Septentrio engineers have implemented an algorithm to compare the parameters of the GNSS with each other. And when significant deviations are detected, an error is generated. Therefore, other constellations must be blocked for successful spoofing.

Unlike the previous test, this one employs a very high power of the GPS spoofer to suppress other constellations. In the rest, the attack scenario was the same.

When the spoofer was activated, the receiver instantly switched to fake signals. Then we applied a shift of coordinates by 2 km. The receiver successfully changed its position.

The receiver failed to detect spoofing even though GLONASS and BeiDou satellites were slightly visible. The receiver classified the spoofer signal as interference and showed the status “Interference Mitigated”.

If the same scenario is repeated with a -50dBm input power level, coordinates shift will not be successful due to the AIM+ technology.

The receiver demonstrated an excellent ability to resist non-coherent spoofing in all the tests with GPS-SDR-SIM. We conducted many unsuccessful attempts with different scenarios.

The AIM+ technology not only protects against interference but also dramatically improves the receiver’s resistance to spoofing+jamming attack scenarios. Multi-constellation spoofing is still expensive. So, in real-life attacks, combining GPS spoofing and GNSS jamming are widespread.

The receiver stopped generating a navigation solution in the presence of non-coherent GPS spoofing, even with minor power. At the same time, there was no detection of spoofing. This is strange behavior because:

The receiver does not switch to new GNSS signals if their parameters are significantly different from the old ones. Do not reset or turn on the GNSS receiver if spoofing is suspected!

Do not expect the receiver to reliably report spoofing. But it is worth noting that spoofing detection is not the main task of the GNSS receiver. Its primary function is the ability to resist interference!

The receiver cannot resist coherent GNSS spoofing. Yet, it cannot be otherwise. For successful detection of a coherent attack, data from a single antenna is not enough. Check out these links to understand why:

Nevertheless, we saw successful detection of coherent spoofing under the following condition:

The detection was not stable, and we could not document it properly.

We suppose that the chipset compares the parameters of the constellations/bands, and if it finds a significant difference, it indicates a spoofing flag. This is a good approach. But in real life, we face the following attack scenarios:

We tested the chipset with FW version 4.8.2. We believe that the receiver hardware platform has the potential to improve software algorithms for spoofing detection. We hope that in future FW version many of the found issues will be fixed (Especially issues 3 and 5).

In our publications, we are in no way trying to discredit any GNSS chipset vendor. We reckon that Septentrio has done a great job in anti-spoofing and interference mitigation.