In this article, we will evaluate the prevailing types of GNSS spoofing, methods, and tools for conducting spoofing attacks, as well as the techniques for their detection.

According to the classification adopted in most scientific publications [1], the following types of GNSS spoofing can be defined:

The prime variances are in the types: synchronous, asynchronous and an attack with a meaconer, since the methods for generating satellite signals fluctuate.

The fundamental dissimilarity in synchronous and asynchronous attacks is whether the generated signal falls into the correlation analysis window of the GNSS receiver or not.

When turned on, the navigation module is in satellite signal search mode. When signals are identified, the receiver enters the tracking mode. The receiver classifies it as interference if the spoofing signal does not fall into the correlation analysis window by the code phase or Doppler.

To perform an effective asynchronous attack, it is necessary, at the first stage, to disrupt the receiver’s tracking of the genuine signals. As a rule, this is accomplished by increasing the power of the spoofer. Consequently, the power of the generated signals in the phase center of the receiver antenna is 40-50 dB higher than the signals of the authentic satellites. After failing to track the signal, most receivers go into search mode and lock onto the counterfeit signals.

Thus, simulating identical time and coordinates is not a validation of a synchronous attack.

An asynchronous attack is the easiest to implement. It is enough to have any SDR (soft-define radio) card: ADALM-Pluto, bladeRF, HackRF or USRP and download an open-source software for generating GPS satellite signals on the Internet, for example, github.com/osqzss/gps-sdr-sim. You can also utilize any laboratory equipment manufactured by Spirent, Rohde & Schwarz or NI with GNSS toolkit for Labview.

To instigate an asynchronous attack, it is enough to generate satellite signals with the correct modulation and frame structure. You can simulate any time and coordinates. 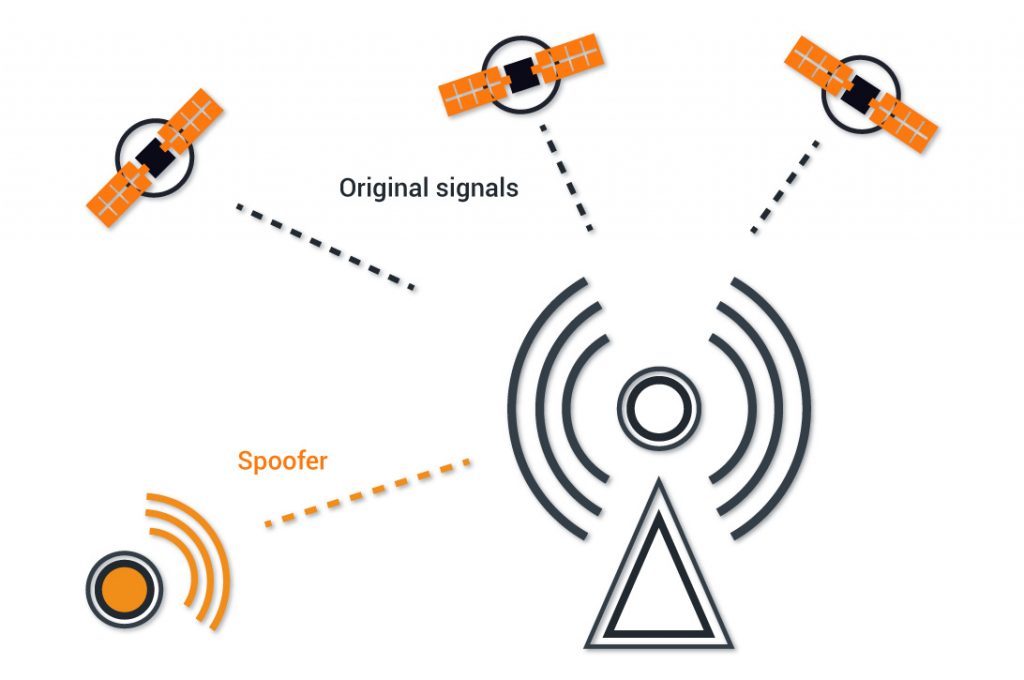 A synchronous attack is more complex. Execution of such an attack requires accurate synchronization with the satellite signals. The phase center of the GNSS receiver antenna needs to simulate signals with the exact same phase of code, Doppler shift, coordinates, and timestamp. The generated signals must contain equivalent almanac and ephemeris data.

At the first stage of a synchronous attack, signals are analogous to the legitimate ones, with a small power level. Then the power is increased to be at least 4 dB higher than the power of the genuine signals. Thus, the “capture” of the correlator occurs. Then a smooth movement of coordinates and/or time can be applied.

Synchronous attacks with one TX can be detected by the RF signal’s estimation’s angle of arrival. If all satellite signals come from one direction, they are counterfeit. In the case of multiple TX, that detection method doesn’t work.

Performing a synchronous attack with multiple transmitters requires several accurately synchronized spoofers. Each has to generate a signal from only one satellite. Generators should be placed around the “target”. This method complicates the attack detection algorithms.

If drones that will follow the satellites have signals placed from the generators of the “bogus” signals, then it is possible to conduct an etalon (reference) attack (subject to accurate synchronization in time, phase, Doppler and power). To conduct a reference attack on all navigation systems, it is necessary to use at least 30-35 drones with synchronized spoofers, with its proper inertial navigation system and a large reserve of energy. No precedents exist as to whether this type of attack has ever been successfully conducted.

To execute this type of attack, it requires to record the signals of the navigation satellites and reproduce them. It is feasible to conduct an attack both in synchronous and asynchronous scenarios. Available SDR cards can be utilized for the execution of the breach.

On the Internet, there are mentions of the devices with a receiver, transmitter, and FPGA. FPGA is used to distort the received signal in real-time. The main advantage of this technique is the ability to attack receivers that use signals with cryptographic protection. The main disadvantage is that time can only be changed “into the past,” along with the intricacies of coordinate distortion.

An attack with a repeater will not be considered, since it is a special case of an asynchronous attack, although there is evidence that it is possible to carry out synchronous attacks if the signals are adjusted in real-time.